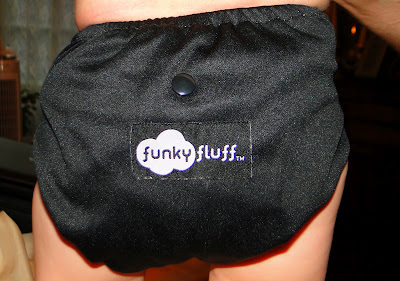 Today’s review and giveaway is sponsored by Funky Fluff. This diaper has some awesome features and I am very excited to share them with you.

The first thing I have to tell y’all about this diaper is what caught my attention from the beginning-it can be an AIO, AI2 AND pocket diaper! When you’re dealing with a super soaker like my son, versatility is key. Not only can the diaper be used three different ways, it also comes with two inserts, one for light use and one for super-soakers, and they can both be used at the same time. 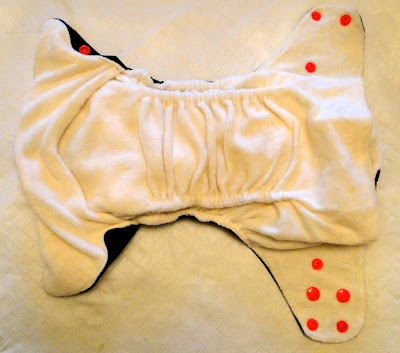 I knew with my super-soaker son that we’d have to have both inserts in at once. There is a snap in the front of the diaper and one in the back of the diaper so you are either able to snap one pad completely in, or snap in one snap on both pads, one being stuffed in the pocket and one laying on top, like I did.
When I snapped the diaper on my son I noticed that I was able to get an incredible fit! He is long and lean and usually there is some gaping, but because of the extraordinary elastic in this diaper, it fit pretty snug. I also noticed, based on how this diaper fit him that we should definitely make it to the 35lb potty-training limit, if not further. (To give you an idea-he’s on the smallest rise and smallest waist settings and he’s 30+inches tall and weighs around 20lbs.) 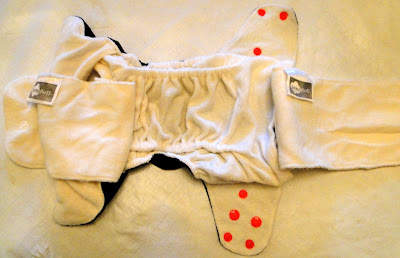 I loved how incredibly soft the bamboo in this diaper was and how gentle it was next to my son’s skin. I’ve also noticed that it’s continued to get softer with each wash which is a big bonus because my son has a very sensitive tushie. 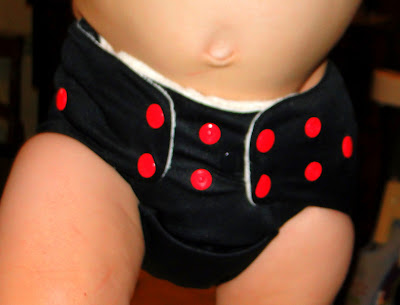 As far as I am concerned, there is only one little problem with the diaper-based on how it fits him now, I don’t think it would have fit him very well as a newborn and he was over 8lbs at birth. I realize that it’s a one-size diaper, but he is still on the smallest rise at 14 months old. Having said that, if your baby has chunky legs at all, it would probably fit him/her great as a newborn.
I would definitely recommend this diaper to anybody, and one lucky fan has the chance to win one! Just enter below and good luck :)
a Rafflecopter giveaway
Posted by Nicki at 12:01 AM 48 comments: