Before I tell you a little bit about the Edward Medina Books, I figured that I would start off by giving you his biography, so here it is!

Biography
Edward Medina is a native New Yorker now living in Orlando, Florida by way of Atlanta, Georgia and London, England. He was raised by his mother and grandmother to believe that life is an adventure best lived to the fullest. To that end Edward has lived his life on the edge of creative possibility.

Over time, he has been a radio and voice over artist. He built a significant career as a producer, director and writer for both digital media and the New York Off and Off - Off Broadway stages. He also had the honor and the privilege to work for the late great Jim Henson. He then went on to become a theme park designer. For fun, he became a steam train engineer and since childhood, a sometime magician.

Although, at this point in his life the magic he creates is more for the page as a YA author of high fantasy, dark horror, and epic steampunk adventures.

Edward's current works include the first novel in the Mathias Bootmaker and the Keepers of the Sandbox Trilogy, It Is Said. The book was well received and has been graced with seventeen five star reviews to date. His gothic poem, The Emperor's Nocturne, was selected for inclusion in the horror anthology Enter At Your Own Risk. This book has been honored with a nomination by the Horror Writers Association for their Bram Stoker Award. A Murder of Crows, his latest release, is the first in a series of novellas under the title Adventures of the X Pirates. In addition, his short story, The Conversation, was selected for inclusion in the horror anthology Satan's Toybox: Terrifying Teddies.

Edward is very much looking forward to completing more of his epic fantasies, along with other tales and poems, of journeys and adventures, both light and dark. Work has already begun on 13 Stories Short, a collection of short stories that have been rattling around in his head, The Academy Darke, the next book in the Mathias Bootmaker Trilogy, and The Demise of Foxy Jack, the next installment in the continuing adventures of the X Pirates. 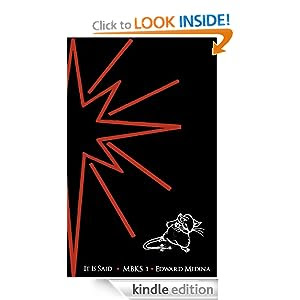 Now, for my views on Edward. I have read the first book of the Mathias Bootmaker and the Keepers of the Sandbox Trilogy , It Is Said (which by the way is FREE until tomorrow 6/26/12...just click on the link!)  This was the first thing I read from this author and I have to say that I became HOOKED!  I started reading this book not knowing what to expect...and I got such a huge amazing surprise from it!  If you like books where you never know what is going to happen next, this is a great book for you!  Mathias is a very confused person in this book.  He has lost his memory on who he is and where he is.  While reading this book, you get to go on the journey with him!  Well, I don't want to give away too much of either of the books, so that is about as much summary as I am going to give you hehe.  I know that I just can not WAIT for the next one to come out!!!! 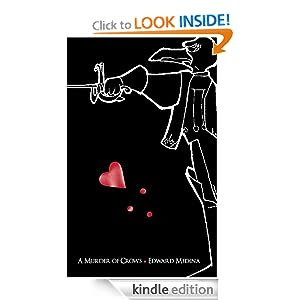 Well, while I was looking for a great book, I just happened to find out that Edward Medina put out the first installment of the X Pirates, A Murder of Crows (link to buy!!!).  And WOW is all I can say about this.  I enjoyed Mathias' journeys, but this was even more amazing!  I read it in just a few hours because I was so hooked.  And, I pretty much am a slow poke reader, especially when I love something.  I don't want it to end!  And when The Murder of Crows ended, I was SOOOO upset!  I seriously don't know if I can wait until the next installment!  I need to know what happened....like, now.  Haha.  Anyways, so this takes you on another journey, but this journey is a little different.  It is about circus animals...yes, that is right, the animals can talk and everything.  I think it is kind of like a Narnia, but at the same time, way different.  But it hooks you just like Narnia did to me!  Seriously, give it a shot, I bet you will love it too.  And at $.99, where the heck can you go wrong?

Don't have a Kindle???  NO PROBLEM!  You can read these books on your computer as well!!!

*This review was written by Nicki.  I was in no way compensated for this post and all opinions are of my own.  I personally purchased both books and then asked the author for permission to use his biography which he agreed to.*
Posted by Nicki at 10:40 PM