The Travels of Having a Baby....

Well, as you all know, we have not had the best time with Daniel.   So, I thought I would blog about it a little while. 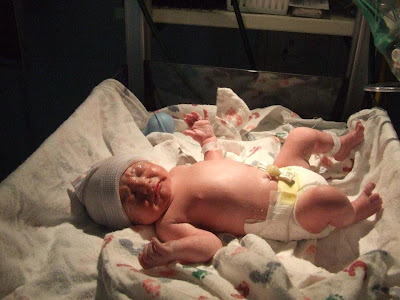 Daniel was born on October 23, 2011.  They told me he was a healthy boy weighing 7 lbs and 10 ounces.  When we were in the hospital recovering, he dropped a lot of weight and was only weighing 6 lbs and 2 ounces.  They told me not to worry.  He was still healthy.  Just go home and keep feeding him the way that he is being feed now.  So, we got ready to take him home.


About four weeks later, we were really concerned with his breathing.  He had a few attacks where he acted like he couldn't breath at all.  He was gasping for air, breathing so fast some times.  We were so scared.  So,  I called the doctor in the middle of the night during one of these episodes, half in a panic.  They asked me to hold the phone up to Daniel's mouth so they could hear what it sounded like.  They then told me to be in the doctor's office the next day to run a few tests on his lungs.  That is when everything started changing...and it started changing for the worse.

So, I dressed him up and got him ready for the doctor.  I figured they were going to tell me there was nothing wrong.  Everything was fine.  I was completely ready for that.  So, they did a few tests, we sat around, waited and waited and waited.  The doctor finally came back....he didn't look happy as he walked into the room.  He sat down and said (omg, I am already crying thinking back to this), "The preliminary test results are back, but we won't have the full results back for a few days.  It looks like your son has Respiratory Distress Syndrome, also called RDS.  The first six months of his life will be critical...."  That is all I remember him saying.  RDS, I heard of that...omg, my son has that!?!?  Don't babies die from that.  OMG...that is all that keep running through my head.  That and "Congratulations, he is a healthy baby boy."  What changed???  What did I do wrong??  Why is this happening to me!?!?!?!?  To my son!?!?!?  My HEALTHY baby boy!!!

I got home...yes, I cried.  I called my family and broke the news a few hours later when I thought I was alright to talk about it.  I wasn't.  I still am not.  When my MIL brought my other son home, she brought two Christmas ornaments home with her.  One that said Lucas and one that said Daniel.  When I saw them, I broke down again.  All that went through my mind was, is he going to even get to see his first Christmas????  Those first few days were hard.  All I did was cry.  Every time my son even moved a little bit I thought he was dying.  I couldn't sleep.  Nothing.  Of course, the first few things we did was get a humidifier for our room and an Angel Care movement and sound monitor.

And then, the doctor's office called.  The full test results were back...GOOD NEWS!!!  Daniel had a VERY mild case of RSD!!!!  They said he would be over it by the time he was six months old!!!!!  We were SOOO relieved!  Our son was going to see his first Christmas!!!!  And he did!

And then, the problems started again.  Fast forward to February.  I took him to a regular check up.  They asked how his breathing was doing.  I told him, well, now that you mention it he has been gasping an awful lot.  Well, this was normal with RDS as I was told.  We went home.  Three days later, Daniel started shaking.  It was a horrible shaking.  I thought he had a seizure!  I called the doctor's office...they said it sounded like regular baby shaking stuff.  I was not convinced.  I was even less convinced when 3 days later, he did it again.  This time we rushed him to the ER.  They admitted him.  And what did they do?  Nothing really.  They did an EKG and an Upper GI (which really confused me). There was absolutely no trace of a seizure.  I told them I was not joking...he was really doing this.  We ended up in the hospital for 3 1/2 days...and still left with no answers as to why my son was doing this.  As I call it, it was the most expensive hotel room ever.

They asked for us to do a follow up with his doctor the next day.  So we did that.  At this point my son is almost 4 months old.  The doctor decided to check on his RDS also.  So, he did that and ran the tests for that.  He also referred us over to a GI doctor.  While we waited patiently for the GI appointment, we found out some more good news...Daniel had no more traces of RDS!!!  Thank goodness!!!!  Now, we could focus just on this.  We started letting our guard down a little more and decided to sit down with a glass of wine while the kids slept.  Well, that is when Daniel's Angel Care monitor went off.  If you are not familiar with the Angel Care monitor, it beeps like crazy when there is no movement for 10 or more seconds.  Well...we ran...I thought we would never get to the top of the stairs to our baby...who wasn't breathing.  Corey got there first and screamed, "HE'S BREATHING, HE'S BREATHING."  As soon as I saw my son's eyes open and his chest move, I collapsed.  I was crying so hard I was hyperventilating.  When I calmed myself down, I just held my baby close.  I knew I would never let him out of my site for a long time again.  Wow, that was seriously the worse night of my life.  We thought maybe he rolled off of the monitor...but he couldn't roll yet.  We went through every possibility we could think of and couldn't think of anything besides he did stop breathing.

Fast forward about a week.  It was time for the GI appointment.  I told him about what happened the night with the Angel Care monitor.  He ran a new Upper and Lower GI.  Took a lot of blood and came back.  My son definitely had Sandifer's Syndrome.  This explained almost everything.  He was probably having a horrible acid attack and that caused him to hold his breath that horrible night.  It explained the huge weight loss, as you can probably tell from the picture right above when he lost about 3 lbs in 2 weeks.  It explained the seizure like activity, his weird yoga like positions, his consistent crying....everything.  We finally had an answer, and a medication!!!

He started getting better and better.  He started gaining weight and was FINALLY in 0-3 month clothes!  Today he still has a lot of healing to do.  He still has his Sandifer's and the most that shows up is the neurological side of it.  I can handle that!  After everything else!  He is now 6 months old...so out of the super scary time period.  He is moved up to 3-6 month clothes!!!  Weighing in at a whole 15 lbs now!!!!

We no longer live in fear.  We thank God for every day we get to spend with him.  Me and my husband spent the whole night talking the day he turned 6 months.  We never thought he was going to make it to 6 months old.  But he did....and he's getting better and better!!!